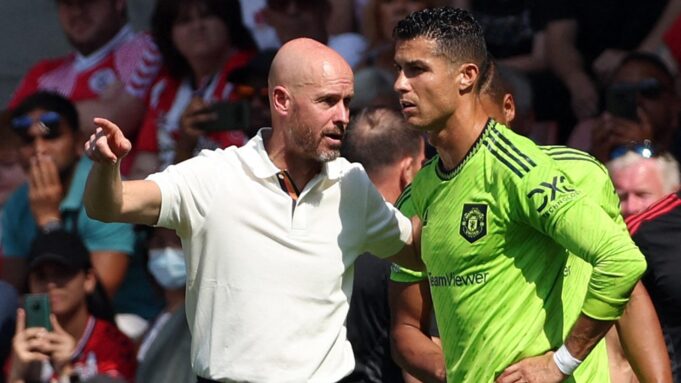 Cristiano Ronaldo has hit out at Machester United in what he has described as betrayal from the English giants.

The Portuguese has found games hard to come by under Dutchman Erik ten Hag and he didn’t have some nice words for the club’s coach stating that he had been disrespected by the manager.

In an interview with Piers Morgan published on Sunday night, following Manchester United’s last game for six weeks, Ronaldo went on to say he has “no respect” for Ten Hag and hit out at the club’s decline since the departure of Sir Alex Ferguson.

Also Read: How Star players faired over the weekend

After a poor start to the season, Ronaldo was dropped to the bench by Ten Hag but he then refused to come on as a substitute and stormed down the tunnel during a victory against Tottenham last month.

It was not the first time this season Ronaldo had left a match early and Ten Hag responded by banishing him from the first-team squad for one match. The Portugal star has since returned to the squad, although he missed their last two matches before the World Cup due to illness.

However, the timing of Ronaldo’s extraordinary attack suggests the 37-year-old believes he has played his last game for the club, with United’s hierarchy previously supporting Ten Hag’s decision to drop Ronaldo following his previous act of ill-discipline.

Then, when asked by Morgan whether United and Ten Hag had tried to make him leave this summer, Ronaldo said: “Yes, not only the coach but the other two or three guys – they’re around the club.” When pressed further, Ronaldo said: “Yes, I feel betrayed. And I felt that some people, don’t want me here. Not only this year but last year too.”

Ronaldo returned to Manchester United last summer, 11 years after leaving the club to sign for Real Madrid as the world’s most expensive player, but the club suffered their worst-ever Premier League season and failed to qualify for the Champions League.