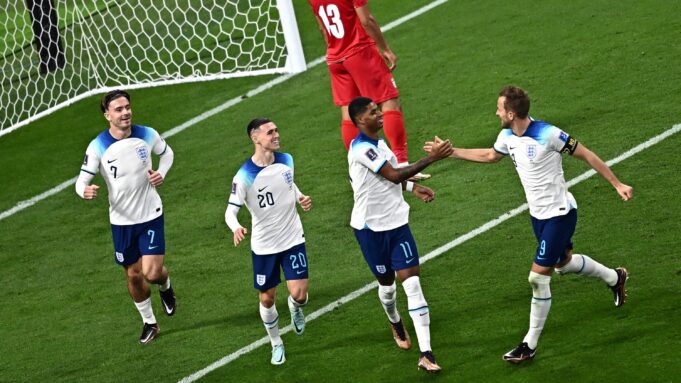 Arsenal forward Bukayo Saka bagged a brace as England began their 2022 World Cup campaign with a convincing 6-2 over Iran on Monday.

The 21-year-old struck either side of efforts from Jude Bellingham and Raheem Sterling in a dominant first half before doubling his tally in the second, where substitutes Marcus Rashford and Jack Grealish also got in on the act.

Mehdi Taremi fired home two consolations for Iran, who were comprehensively beaten by Gareth Southgate’s effervescent team as those in white kicked off their bid for glory in near-perfect fashion.

Following 14 minutes of stoppage time in the first half, another 10 were added on at the end of the second – the eighth minute of which forced Pickford to tip a close-range effort from Sardar Azmoun onto the crossbar and over the top.

However, hopes of England equalling their 6-1 thumping of Panama from 2018 were dashed when Iran was awarded a last-minute penalty by VAR, with John Stones tugging Morteza Pouraliganji down by the shirt, and Taremi sent Pickford the wrong way.