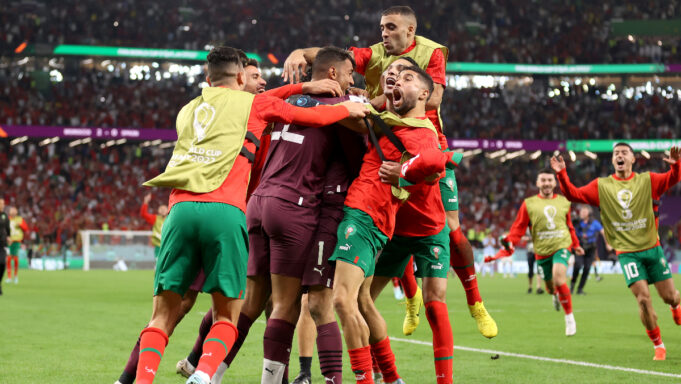 Morocco dumped Spain out of the World Cup in a last-16 penalty shootout after a goalless draw over 120 minutes.

Hakimi, a product of the Real Madrid youth system, calmly slotted his penalty past Unai Simon in Spain’s goal to seal Morocco’s 3-0 win in the shootout.

Spain coach Luis Enrique had claimed his players prepared by taking 1,000 penalties as homework but Pablo Sarabia, Carlos Soler and Sergio Busquets all missed from the spot and Madrid-born Hakimi dinked his home to the delight of Morocco’s raucous support.

Spain had been hoping they could repeat their 2010 World Cup triumph after reaching the semi-finals of Euro 2020, where they were also beaten on penalties by Italy.

The teams were closely matched through a nail-biting clash, with Spain having more of the ball but Morocco creating the better openings, few though they were. Having been sent on apparently for the shoot-out, Sarabia struck the post again from Spain’s first penalty, after Abdelhamid Sabiri had sent Morocco ahead.

Soler and Busquets missed, while Hakim Ziyech scored, before Hakimi netted against his birth country to ignite wild celebrations. Morocco now advances to a quarter-final clash with either Portugal or Switzerland who meets later today.