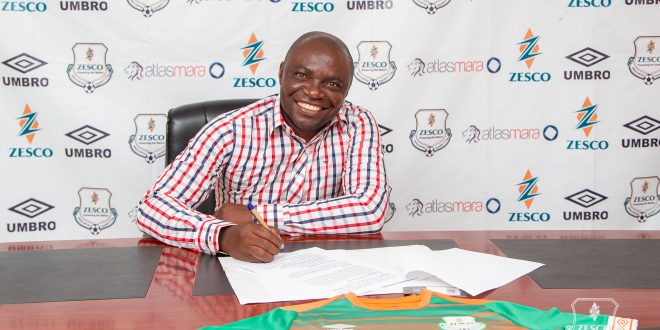 Zambia Super League side Zesco United have appointed Numba Mumamba as their new head coach on a three-year contract.

In a statement, Zesco said: “Numba Mumamba will take over as head coach of ZESCO United from the 2020/2021 FAZ/MTN Super League season signing a three-year contract.

On his part, the club’s CEO Richard Mulenga said: “Mumamba is one of the finest young coaches to have emerged from the Zambian game in recent years. He has managed at the top level of Zambian football and he knows the domestic game very well.

“I would like to take this opportunity to welcome him to ZESCO United. His track record of success is ideal to take this club forward.”

“We are delighted to announce the appointment of Noel Mwandila as 1st assistant coach to Mumamba. I wish to further announce that Emmanuel Siwale remains 2nd assistant to our new coach,” Mulenga added.

42-year-old Mumamba has managed at the highest level of the Zambian game in the last six years winning the FAZ/MTN Super League title in 2016, Absa Cup championship in 2017 and reaching the group stage of both the CAF Champions League and Confederation Cup respectively.

Zesco is the home of Kenyan quartet of Ian Otieno, David Odhiambo, Jesse Were and John Makwatta.