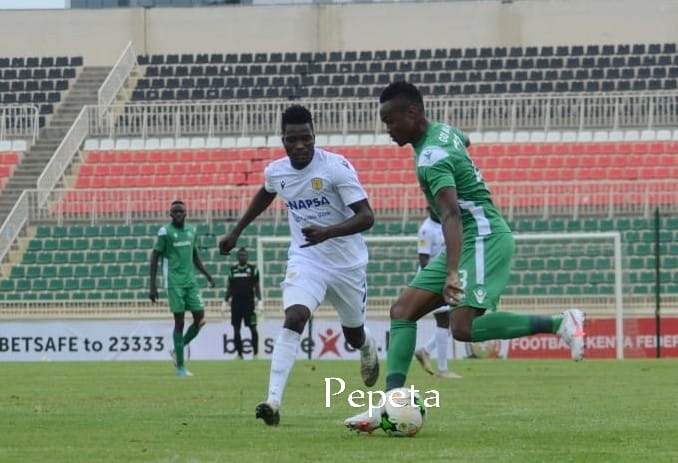 The drama that had been experienced before the game had given Gor Mahia a little chance of qualifying to the group stage of the competition with the team forced to travel to Zambia on match day instead of the earlier day of Friday; the Green Army having lost the first leg by a solitary goal.

Going by the start from the visitors, it didn’t look like they had any problems in the team with their attacking instincts rewarding them with a goal in the 17th minute through Samuel Onyango whose shot outside the box beat the opposing keeper.

The response from Napsa was immediate with Austine Banda restoring parity for a 2-1 aggregate just a minute later. Gor Mahia however were not going to take things lying down and after some quick play, Clifton Miheso was to restore their lead in the 20th minute.

The what was proving too much for the home side with the Zambians forced to make an early change where Emmanuel Mayuka was thrown into the fray for Benson Mwape; the three goals being the difference between the sides heading into the half  time break.

On resumption, Napsa looked like a changed team with Gor Mahia forced to withdraw the ineffective Jules Ulimwengu for Titto Okello just nine minutes after resumption. Napsa was to react by making a double change with Aaron Kabwe and Jimmy Muuleya coming on for Daniel Adoko and Danny Silavwe respectively; Gor withdrawing John Macharia, who had earlier missed a glorious chance to extend Gor Mahia’s lead for Chris Alfa.

By the time Gor Mahia introduced Joakim Oluoch and Sydney Ochieng for goal scorers Onyango and Miheso, the damage seemingly had been done but drama was left in the dying minutes when the referee pointed to the spot after Charles Momanyi had brought down an opponent in the box; up stepped Emmanuel Mayuka to send Napsa to the group stage.

Engin Fırat: Who is the potential new Harambee Stars coach

From Turkey with Love: Hassan Oktay opens up on his Gor...