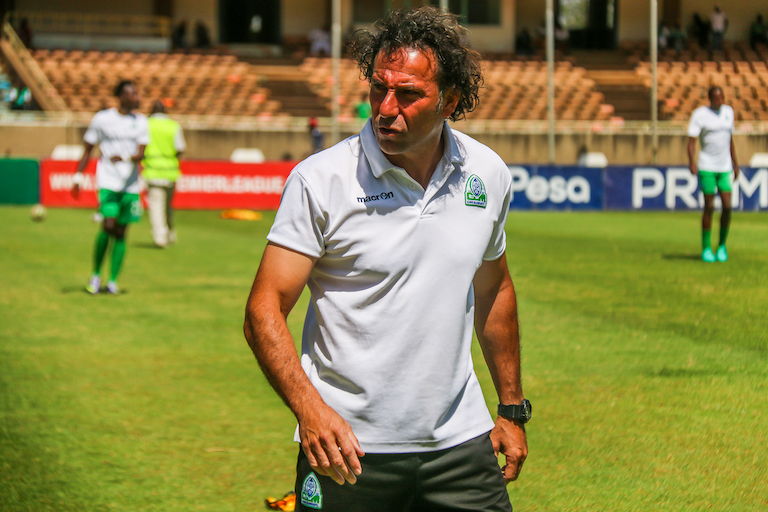 When Gor Mahia’s history in CAF competitions is to be written, the name Hassan Oktay will definitely feature.

The little-known tactician joined Kogalo in December 2018 to replace Dylan Ker who had left the club earlier. In his stint with the Kenyan giants, he won the league title and led them to the quart finals of the CAF Confederations Cup before leaving the team in August 2019.

Pepeta’s Kiplimo Kirwa sat him down for an interview where he shared about his time in Kenya.

Take us through your Football Journey?

First, I was a footballer before I got a spinal injury that kept me out of the game for some time. I later ventured into coaching diplomas and did my badges in West Ham United, England. I worked for semi poor clubs and other professional Youth teams among them Watford Academy and other converse levels of football in England.

What made you fall in love with Kenya?

Kenya is a good place, their climate is favorable and the way of life is just awesome. Their food is fresh, I liked Ugali and fish. Kenyan people are very friendly and not aggressive. Kenya is a good and safe country with nice environment. I Love Kenya.

How can you compare KPL with other leagues you’ve worked in?

Organization-wise, I don’t think the Kenyan Premier League is that bad as many would think. What’s needed is just a proper organization more so with professionalism. Teams should strive to have their own facilities too like gym, training grounds to help in their daily organizations.

I think money is another issue to with the league. How money is utilized or planned for is very Important thus improving the quality of the League. We beat Zamalek at home but look at how they run their things. That’s a proof that Kenya has the needed talent, they just need to pump in more money in the clubs and take football seriously.

How was your stay in Kenya?

My stay in Kenya was all good l can’t complain but the truth is, I encountered some problems with my team (Gor Mahia). When I joined the club, the players had low fitness levels. There was no preseason and it affected the start of our season. It was not a food start and I got a lot of message asking me to leave the club and they were right. Gor Mahia is a big club with a huge following so the fans were always demanding.

There was a time I thought of quitting but after sitting down with the chairman (Ambrose Rachier), he assured me of my position and gave me time to turn things. As it turned out, the decision to stay was one of my best in my coaching career.

How was your Relationship with the Management, and the Technical Bench?

The Management was very understanding. We had a good understanding from the CEO, treasurer, the Chairman and the whole management.

We were close too as a technical bench and I think they made my work easier. We achieved greater things and I must admit my assistant coach Zedekiah Zico Otieno was a very good coach.

Your toughest match at Gor Mahia?

The last two games of my tenure at the club. They were against Sofapaka and Bandari. Very tight and competitive games because those would determine who wins the League. Mashemeji Derby remains to be one of my easiest ties while coaching the club.

What was your most Memorable Moment at Gor Mahia?

The game against Petro Atletico at MISC Kasarani is game I will never forget. We played with nine men for an entire 60 minutes but eventually won the game which saw us through to the quarterfinal of the CAF Confederations Cup. It’s not easy to win a game in such scenario but the boys were up to the task.

Mention 4 of your favorite Players at the Club?

I will mention five players in the lot I coached. Francis Kahata, Shafik Batambuze, Captain Harun Shakava and Joash Onyango. Samuel Onyango and Lawrence Juma can’t miss in the list too. They were dedicated players who exhibited different talents that I found valuable in the team. Generally, the group I had was a good group and I have to laud all of them.

Who remains your Toughest Coach you ever faced in the league?

Many Kenyans Coaches have Similar style. Not that it’s a bad thing but I found most of them having a common style. I didn’t concentrate on any of them because as a coach I’ve always concentrated in my style of play. But they were nice people and I wish them the best in their careers.

Your assessment on the current Gor Mahia squad?

First of all, the club needs to keep all of their top players if they are to compete. If a player decides to leave, then the management should try and replace them with the same type of a better player because Gor Mahia is a great club and any player’s impact needs to be felt.

They need dedicated players too. I think it’s an area that hasn’t been addressed well. I know financial issues have been a matter for the club but players need to understand the meaning of the badge. Every time they decide to go out and represent the team, they should give their all. That’s the only way to advertise their abilities.

Aside from coaching, how do you spend your free time?

Travelling, riding a horse, reading Novels and fishing. I love fishing a lot.

What next for Hassan Oktay?

There are offers both from Africa and abroad but am weighing my options. When the right time comes I’ll make the decision.