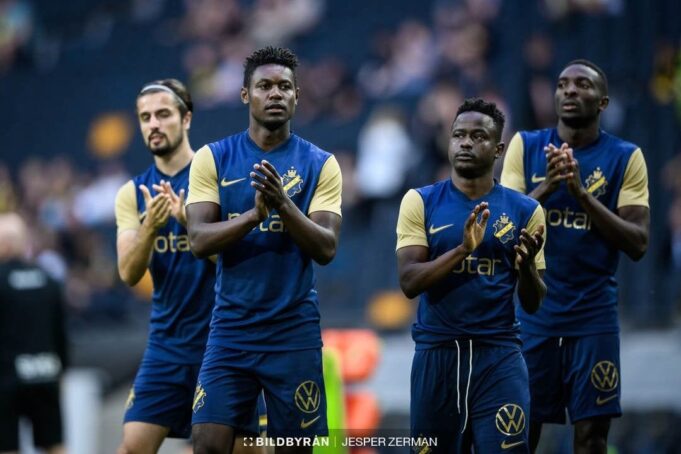 For the first time in the history of Swedish giants AIK, they had three Kenyan players in their ranks in season 2022.

Defenders Eric Ouma and Collins Shichenje and striker Henry Meja were the three players who represented the Stockholm-based club in a season where they finished fifth with 50 points after 30 games.

Also Read: Nzoia Ready for the new season after signing

It was Meja’s and Shichenje’s first season with AIK but the latter arrived later due to issues with his work permit; Ouma having in the books of the team since 2020.

In the field, Ouma had the most appearances of the three with the left-back appearing 26 times for the club and contributing two goals. The player started 25 games, was substituted out four times, and came from the bench once. There is only one game where he sat on the bench and was not called on to feature.

Shichenje who made his competitive debut for the club in July saw his progress derailed by an injury and suspension. Despite arriving late at the club, he managed eight appearances; four of these being as a starter. He was substituted in four times and substituted out three times. He was to receive a red card last month just three minutes after coming on in their 2-1 win over Djugardens. The defender who can also play as a midfielder appeared on the bench 12 times.

Striker Henry Meja had the least outing for the club with the former Tusker FC man accumulating just a total of 14 minutes the entire season. Meja only featured in three games against Degerfors, Mjallby and GIF Sundsvall; all coming as a substitute. He however appeared on the bench nine times.