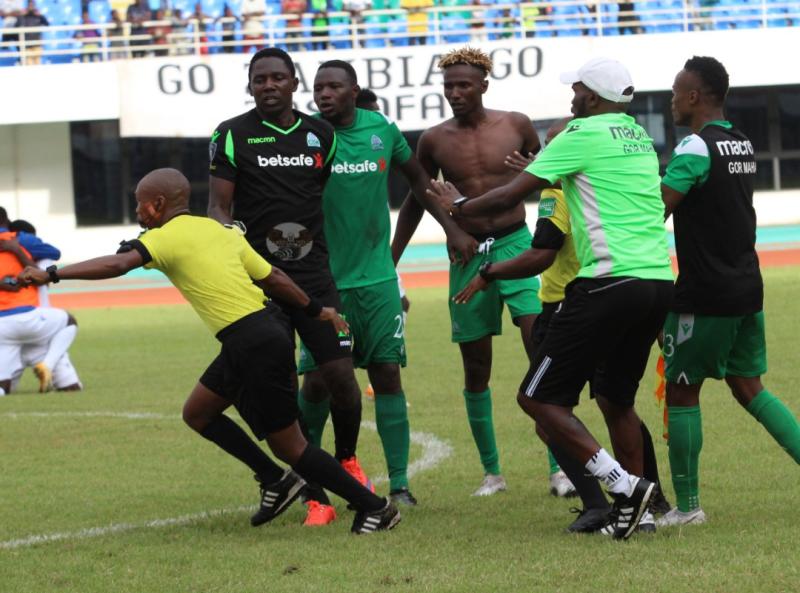 Gor Mahia duo of Kenneth Muguna and goalkeeper Boniface Oluoch has been fined by the Confederations of African Football (CAF) for attacking a match official in their CAF Confederations Cup against Zambia’s Napsa Stars earlier in the year.

Gor Mahia were headed to the group stage of the CAF Confederations Cup after coming from a goal down to draw Napsa Stars 2-2 on aggregate but referee Lebalang Mokete from Lesotho gave Npasa a last gasp penalty which was tucked in by Emmanuel Mayuka.

When the full time whistle went off, Gor Mahia players confronted the match official with some of them claiming that they were attacked by the Kenyan side; an incident they noted on their report which was then investigated by the CAF Disciplinary committee.

“After the match, Gor Mahia players Boniface Oluoch and Kenneth Muguna attacked and used abusive language against the referees. They were stopped by the police. Gor Mahia players also broke three windows of the stadium dressing room that they were using,” a letter from CAF to Gor Mahia noted.

“(Dude to the named offenses, CAF) suspends both players, namely Boniface Oluoch and Kenneth Muguna for their next four CAF inter-club matches. A fine of $15,000 on each of the named player has been initiated for their regrettable aggressive behaviour against the referees.”

Apart from the fines on the players, Gor Mahia have been instructed ‘to check the cost of damages incurred by Napsa Stars and reimburse them for damages caused by their players’ with the club allowed to appeal the decision in writing within three days of notification if they feel aggrieved.