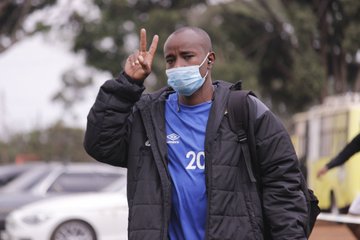 Eric Kapaito ran clear in the golden boot race as he scored a brace in Kariobangi Sharks 2-2 draw against Western Stima on Monday in a Kenyan Premier League clash hosted at the Thika Stadium.

Kapaito came to the game looking to open the gap between him and the players in the golden boot race and he did just that in the 17th minute when he put Sharks into the lead. Stima had a perfect opportunity to restore parity four minutes later when they were handed a penalty but Baron Jobita was to waste his spot-kick.

The visitors were to be punished by Kapaito once again in the 36th minute when he scored his and Sharks second of the afternoon but Rodgers Ouma ensured that there was a frantic second half with a goal in the dying minutes of the first half as Sharks headed to the break with a slender 2-1 lead.

It was a Stima’s affair in the second half with Jobita atoning to the penalty miss by putting his side levelled in the 71st minute what was to prove to be the goal that earned his side a point in the game.

The draw means that Sharks stay at position five with 35 points with Stima being 15th with 17 points.

What next for Eric Ouma