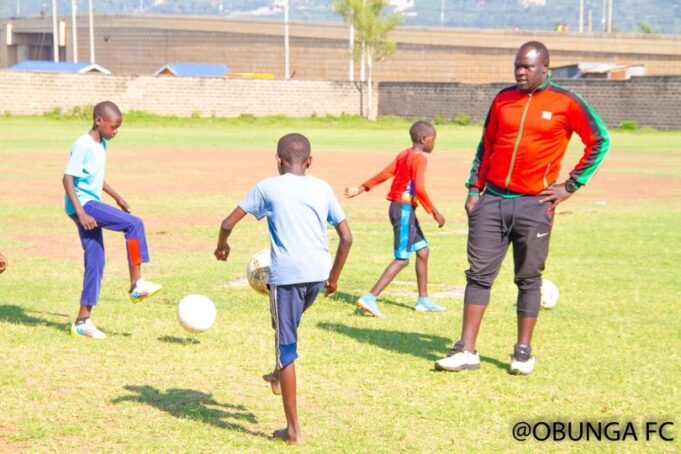 Kisumu County’s hope for a represantive in the FKF Premier League depends on Wazito FC who still have a pending court case that should be decided soon.

For the second season running, the county has not had a representative in the Kenyan top flight after the relegation of Western Stima FC; this coming after the death of Chemelil Sugar FC and the early relegation of Muhoroni Youth FC. It is for these reasons that budding coach Amos Ochieng wants to use these disappointments to horn a future generation of stars.

Having a basic coaching license after attending a coaching course rolled by the Football Kenya Federation before Covid, Ochieng currently horns a series of young players around Kisumu and uses the holidays to assemble and fine-tune their skills.

“Kisumu has a massive pool of talent and it’s sad that we don’t have teams to represent us in the top flight. We are not badly off despite the setbacks but each time you want young kids to grow up in environments where they have proper role models in the careers they choose. Having a team in the top flight motivates them more since that’s the highest level in the country and having people they relate with in that tier gives them so much hope in the things they do,” Ochieng opines in an interview with Pepeta.

While he horns young kids from the age of eight at their Obunga Complex base, Ochieng is often contracted by county teams to transfer his skills mostly when there are tournaments around Kisumu County.

“Coaching is my passion and I do that for a few teams around here (Kisumu) but my concentration is on the kids. I want us to have a large pool to choose from. I might be based here in Obunga but I get calls from across town by parents who wants their kids to join our program which is free of charge.

“My target is to see these young players in serious teams when they hit 16. I believe we are in the right direction in matters of talent development and encourage anyone to follow this path because we must develop kids at a young age first to ensure that we don’t run short of talents for our senior teams,” he adds.

While he isn’t charging any amount for his clinic, he says the challenge is the number and having kids who are from a humble backgrounds.

‘While there are parents who can afford the basic things for their kids here, I have players who come here with nothing. Some of them can’t even afford meals from their places so most of the time we share what we have. Our biggest challenge is to ask such kids to come with things like training boots and bibs so we try as much to call a few friends to top these deficits. I’m not into asking for any money now, as long as we have the training equipments, Im good to go,” Ochieng opines.

The sessions at Obunga happen daily from 9 am to noon with friendly games against sister teams across town scheduled every weekend to gauge their progress.