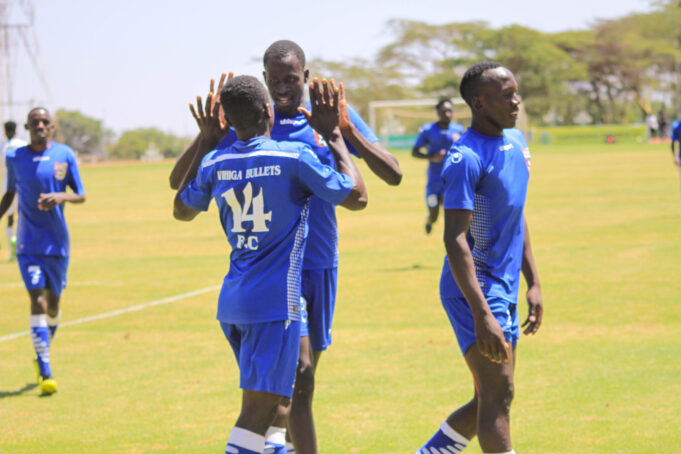 A lot has been said about the FKF Premier League top scorers in season 2022/23 after some brilliant start.

With Benson Omala leading the golden boot race with nine goals, his tally has been boosted by the hattrick he grabbed this past weekend against Vihiga Bullets in a game that was played in Kisumu’s Moi Stadium, a ground he knows so well having been brought up there. But who else has grabbed three goals in a game this season?

The first hattrick of the season was recorded by Tusker FC striker Deogratious Ojok in their week two 4-1 win over Nairobi City Stars. The Ugandan first goal of the game was an equalizer after City Stars had taken the lead through Samuel Kapen. Ojok was to double his tally in the 39th minute before completing his hat trick in the 59th minute.

The second hattrick was by Kakamega Homeboyz’ Michael Karamor as his side ran 4-2 winners over visiting FC Talanta at the Bukhungu Stadium. His first two goals of the game came in a span of ten minutes from the penalty and while City Stars pulled a goal back towards the end of fir half, Karamor had another penalty to convert before half-time as the home side raced to a 3-1 lead at half time.

City Stars were to concede another hattrick from striker Vincent Ogola in their 4-2 loss to Vihiga Bullets. The striker has six goals to his name this season. In what was their first win of the season, Vihiga were to take through Ogola in the 34th minute before the striker doubled their lead in the 45th minute. His hattrick was completed seven minutes after the resumption with their other goal scored by Enock Masinza.

FC Talanta’s Brian Yakhama was to take advantage of Mathare United’s deficiency to put three goals past them in a game that they had from behind twice to pick the entire three points.

Bullets however became the latest team to concede a hattrick after conceding three against Benson Omala in the last game week.

Also Read: Olunga on a brace in Al Duhail win