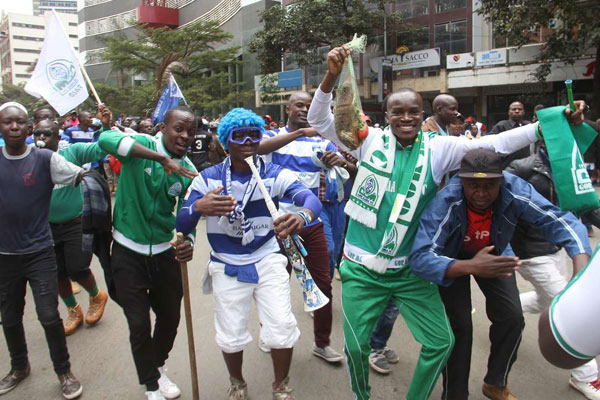 When Gor Mahia and AFC Leopards kick off once again at MISC Kasarani in what should be the most entertaining fixture in the Kenyan Premier League calendar, there will be a slight sense of shifting landscapes beyond the usual sound and fury.

The 91st league Mashemeji Derby will be taking place without both teams having any significant interest in the title race. Talking of a power shift might be far-fetched but the form Kakamega Homeboyz and Tusker FC, who meet on the same day, has exhibited in the past two seasons should have the Kenyan giants looking back and reflecting on the things they might have done wrong.

The current state of both teams makes this derby another mere fixture but like all the best grudge matches, this tie often seems to operate in isolation from form, in-house troubles, and league position. It is a fixture powered by its own unstinting malevolent energies and today won’t be different.

Gor Mahia is fifth with Leopards a distant eleventh and while any visitor in this country might feel this will be a mismatch, the news is the latter has enjoyed some good outings in recent games. In Patrick Aussems, Leopards boasts of one of the best coaches in the league who has them playing beautiful football. Their young side has outdone themselves and while results haven’t gone the way they would have wanted, Gor Mahia would be worried about their opponents’ resurgence. The brilliant display from tose young boys have had their fans back in the stadium something Gor Mahia isn’t enjoying currently.

On the other divide, while Mahia hasn’t identified Leopards as a particularly bitter rival in recent meetings, they as anyone know that it won’t be an easy ride at Kasarani. Away from the low fan turnout in their games, the constant change of coaches has made it hard for the players to settle and that can be noted by the inconsistency in games. They have had two wins, two draws, and a loss in their last five games and would want to maintain their dominance against a team that last beat them in 2016.

The condition of both clubs hasn’t been helped by the football environment that we currently find ourselves in. With the FIFA ban on the country, it has been hard to know where the league lies. Mathare United dished their third walkover in the season and no one knows if their ouster will be ratified by a local arrangement or if they are clinging to FIFA to lift the suspension so that the league can be considered null.

The uncertainty surrounding the league is so much that none is sure of where their teams would be in the coming season. It is a move that has watered down the competition with most teams and the two biggest clubs in the country have been affected. The continental appearance that may have appealed to a team like Gor is gone and they might be seeing the derby as just another friendly fixture in their roster this season.

While both teams have troubles of their own, and the standard of this fixture has been watered down, what is undeniable is that this fixture has produced some wonderfully engaging matches before. We might not have the derby that were we treated to years back where both teams had some of the best foreigners in the region but the presence of genuine homegrown players in both teams should give us some hope for the future.