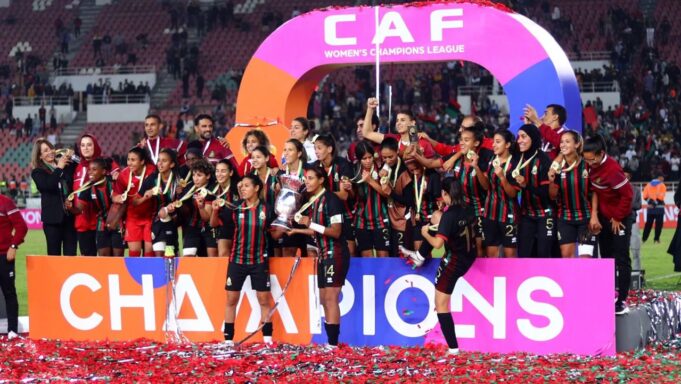 Hosts ASFAR Club are the new champions of the CAF Women’s Champions League following their 4-0 win over Mamelodi Sundowns on Sunday night.

Fatima Tagnaout’s penalty was the difference between the two sides heading into the halftime break but the hosts upped the gas in the second half after their guests had been reduced to nine players. Ibtissam Jraidi then doubled the hosts’ advantage after the break before going on to grab her hat trick later on.

Sundowns Ladies were then reduced to 10 women in the 33rd minute when Rhoda Mulaudzi was given her marching orders for a late tackle on Zineb Redoauni. The defending Champions were reduced to nine women in the 52nd minute after Nhlapo was given her marching orders for a second bookable offense. The defender committed a foul just outside the 18-yard box and from that resultant free kick, Jraidi doubled ASFAR’s lead.

In the awards category, keeper Khadija Er-rmichi of ASFAR won the golden glove award with her teammate Fatima Tagnout walking home with the Most Valuable Player Award. With her hattrick in the final, Ibtissam Jraidi won the golden boot after notching a total of six goals in the entire tournament.

Bayelsa Queens of Nigeria who beat Simba Queens to the third spot were named the fair play team of the tournament.

Also Read: How Harambee Stars players fared over the weekend